Steam whistles were not only signaling instruments but also prestige objects; especially on the small ships in the port of Hamburg. There were organ pipes, two-tone pipes and triad pipes. Organ pipes are recognizable by the fact that it was possible to see through the sound hole. The triad pipes were carefully and elegantly adjusted.

Injectors were used to suck water in with the help of the boiler's own steam pressure and then feed it to the boiler as supply water under increased pressure. This fitting has occupied generations of technicians and many different inventions have been developed.

The three-tone steam whistle installed here sounded for nearly 90 years on the Kremper Lederwerke, not only at the beginning of work, but also in case of fire in Krempe and in war as an alarm signal. Condensation must have broken the cup several times. It was carefully welded and served until the company was closed in the 70s.

In the port it was generally said with the small ships: "Stop the boat, the captain wants to ring the whistle". An indication that the pipes were often oversized. A deep tone should signal, here comes a big ship, although it was nevertheless only a small boat or a small tugboat.

History of the "Hafenkonzert life":

The "Hafenkonzert life" also dates back to the early days of radio broadcasting. It is reported that during one of the early morning performances at dawn, the musicians took protection from the strong wind behind the superstructures. The director had specially bribed the ship's crew to open steam so that at least the steam whistle could be used. The big whistle was filled with water and the supply pipe also contained a lot of condensate. During the first attempt at whistling, a huge flood of water flowed over the musicians and the tuba only made gurgling noises.

These steam organ whistles were characterized by a deep, broad and full tone. They were particularly suitable for ships, factories and all purposes in which a full, audible sound was required. 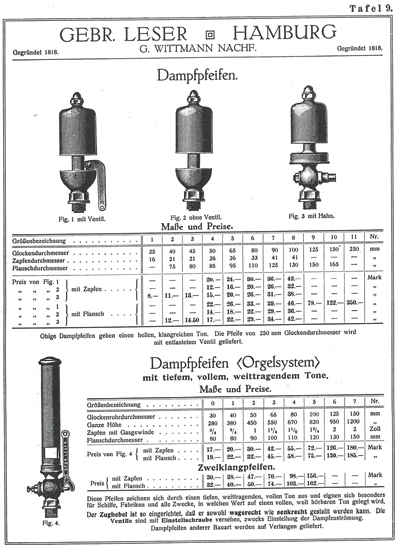 More modern than the steam pipes were the steam sirens. These were characterized by a particularly strong and loud sound at a long distance compared to bell and tube steam pipes due to their design. The tone can be tuned high or low, depending on how you open the steam valve (by pulling the lever) less or more, shorter or longer time. Because of that device the most different signals could be given with one instrument.

These signal equipment had to be lubricated additionally, which is why a Stauffer bush was also fitted. Steam sirens were also more susceptible than steam pipes.

Wilhelm Leser jun. was able to gain his first design experience with the model shown here.

The restarting injector made of gunmetal exhibited here was installed on the steam boiler of the Deback company in the Wendenstraße. The restarting injectorwas named after its ability to self-adjust in the case of a temporary lack of feed water during operation. This feature made it particularly useful where the installation of an standard injector was impermissible due to a sudden shortage of water or strong vibrations of the supply water.

The internal parts of an injector are quite complicated. The adjustment of the dimensions of the individual components and their distances from each other required a great deal of sensitivity until it was possible to design the production so precisely that there was no need to test and readjust the injectors. The testing and readjustment was done on the steam boiler.

Further background knowledge on the development and installation of injectors by Leser:

Our great idol Schäffer & Budenberg in Magdeburg (later MAW) patented a folding nozzle. This had a movable part, the folding axis of which was transverse to the direction of flow. In order to avoid this patent, the hinged nozzle was developed with a hinged axis along the flow direction. As it turned out, this was even more favourable, because the required diameter was already released when entering this part. A patent bypass even turned into something better.

When Leser gave up the production of the injectors, a commercial article was needed as a replacement. Leser dealt therefore with replicas of the Körtingschen injectors, with which this problem was solved by a movable ring and with GDR products. These did not work satisfactorily. Contrary to practice, the last injectors in stock were put to the test again and functioned perfectly. 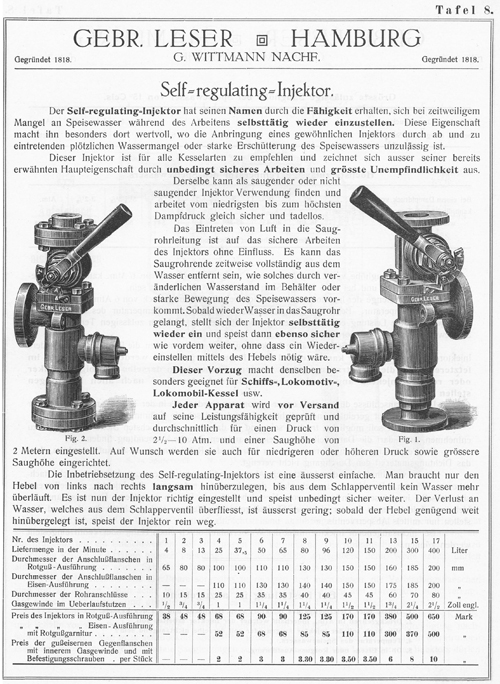 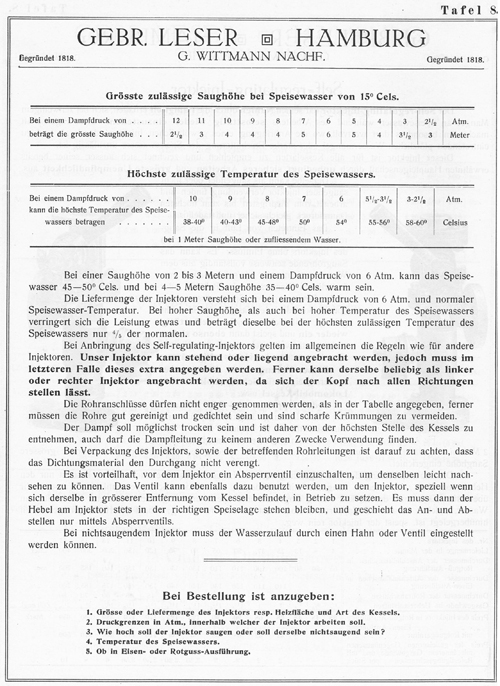 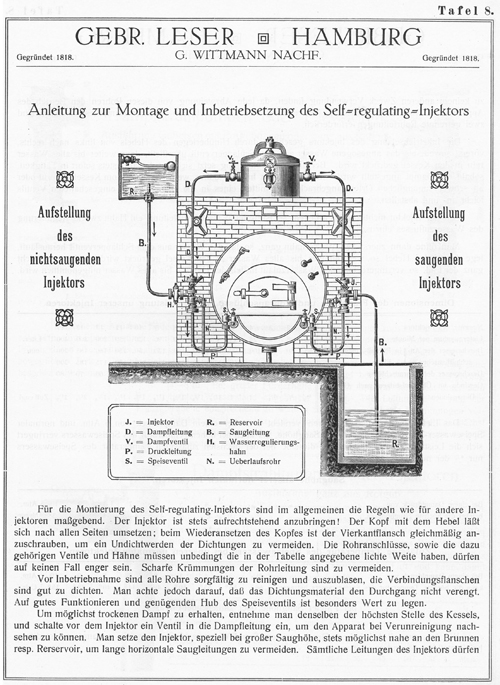 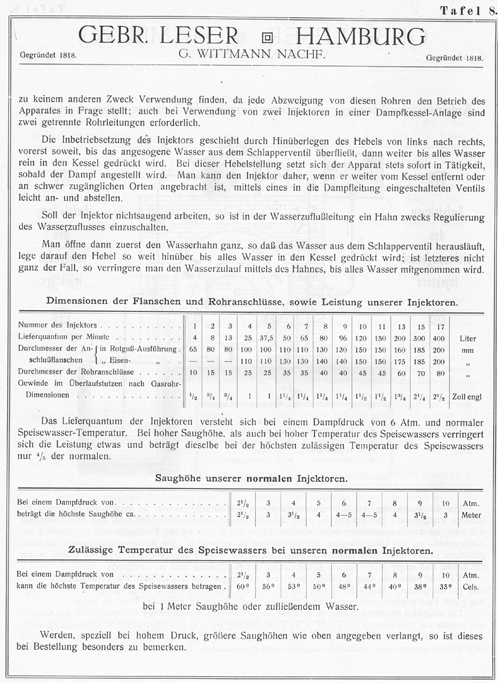 Steam engines require constant lubrication due to the large number of moving parts. This was done by oil with a drip oiler system or, as with the steam grease gun, with an oil graphite mixture.

The flow of the drip oiler was regulated by the tap according to the favoured "good judgement" or in the case of the steam lubrication press depending on the number of revolutions by an articulated linkage.

Steam jet pumps were used to fill water tanks of all kinds, as ship bilge pumps, as well as for lifting muddy liquids such as mash, tap water, stillage and lyes. Therefore, a jet pump requires no mechanical drive, i.e. no moving parts.

Graphic of the functional principle: 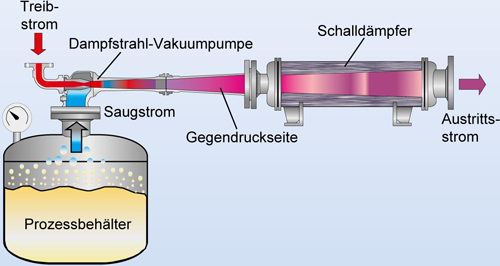